These three boys were enjoying the opening ceremony for the Cheng Long Wetland International Environmental Art Project. The ceremony was held April 13 at the village temple and many in the village came to enjoy the food and presentations.

Close Up of Two Puppets from the Puppet Show 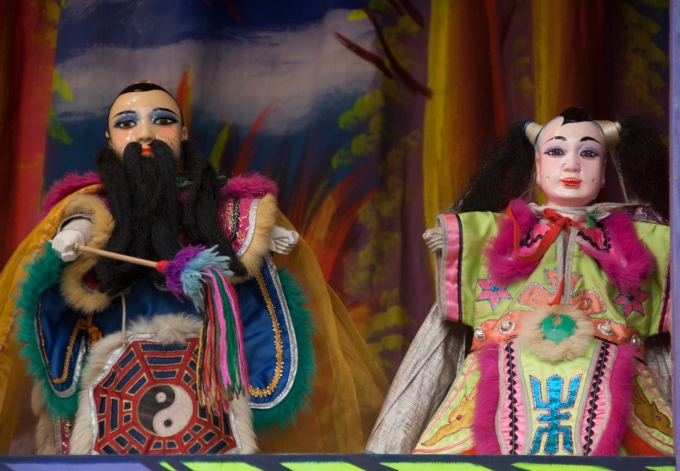 These are two of the puppets from the puppet show at the birthday party. Looking closely you will see that the puppet maker kept the two dimples in the face of the female puppet.

Puppet Show Ordered for a Birthday 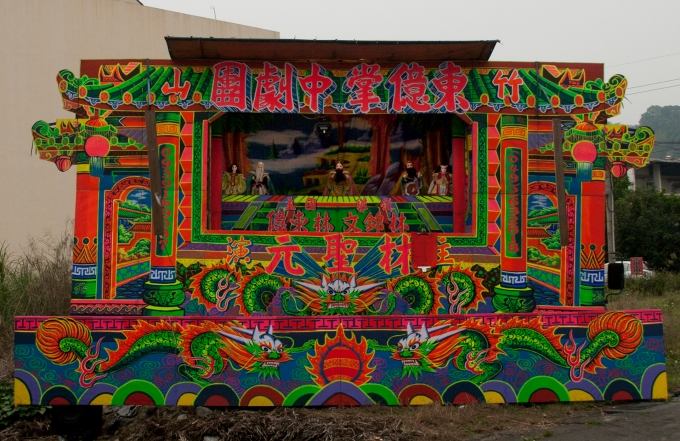 While in Zhushan we came across this traditional puppet show. It is transported in a small truck and the sides are all folded into the truck bed. The puppet characters represent the eight gods that bring treasure and fortune. Earlier in the day I saw these same gods painted on the back of a tour bus. They were all in a boat sailing off for treasure. The implication was that if you joined this tour bus you too would find treasure. After leaving the puppet show we stopped at our guest’s home and outside they were putting up a tent for another birthday party. The banner stretched across the entrance, yes you guessed it, there were the same eight gods of treasure. 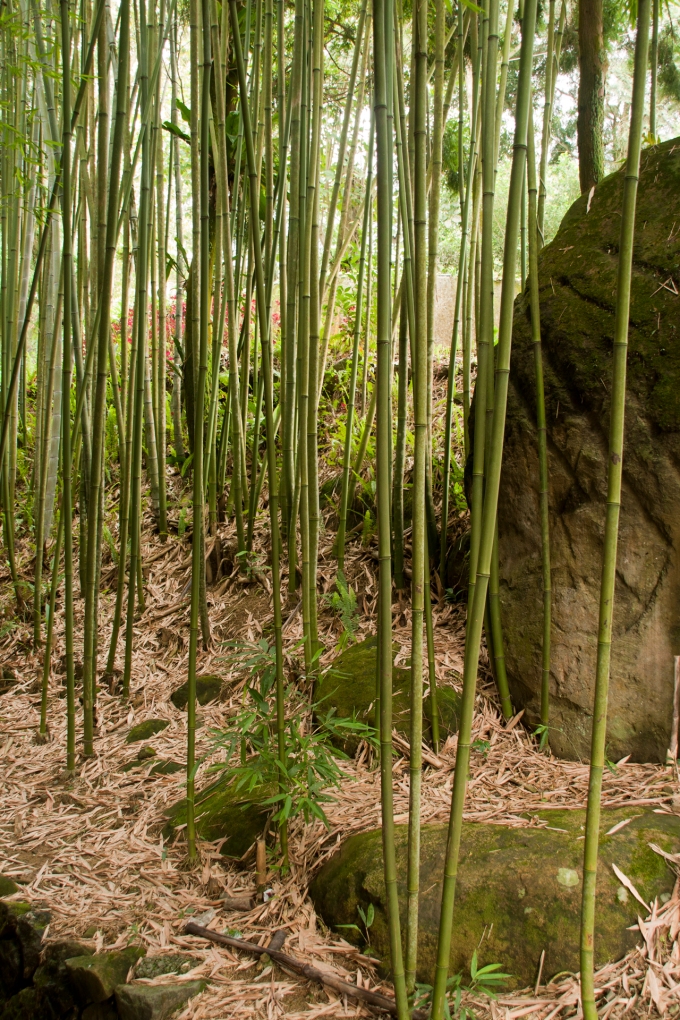 Zhushan translated, I believe as bamboo mountain boast of its beautifully made bamboo products. The trees are very beautiful as well. 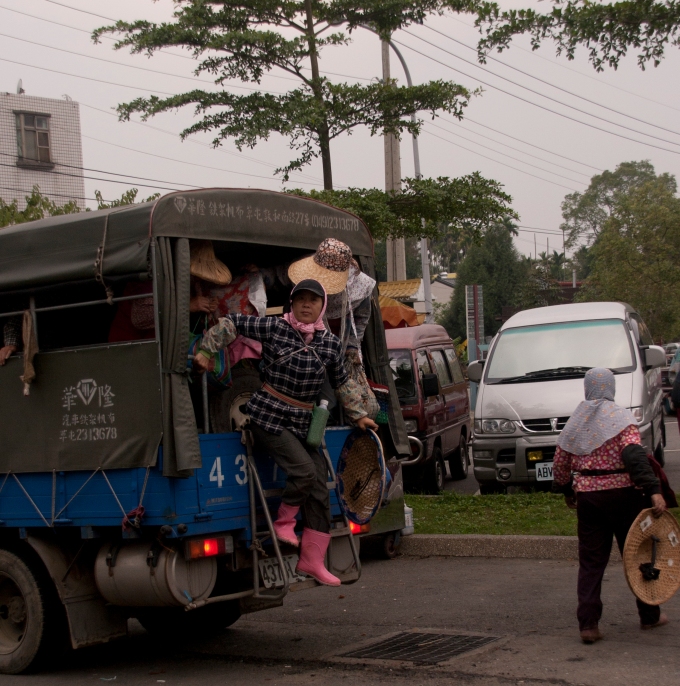 We were visiting the Zhushan area of Taiwan on Monday. There is a lot of Yulong tea grown in the area. Yulong tea is some of the best tea in Taiwan. With the influx of Mainland Chinese tourists they are buying up most the tea. The Taiwanese are having to pay higher prices as a result.

Taiwan Puff Car – Front and side

Jane and I were walking back from shopping and saw five cars, each representing different characters that included two with characters Japanese animation, one with Hello Kitty, and the last two as Winnie the Pooh and the Pink Panther. I don’t know the character depicted on this care but it was the most complete. The owner had done a wonderful job transforming his Suzuki into an entirely new life. These all showed a true dedication of love.

Taiwan Puff Car – Back and Side

This shows the wonderful character painted on the side of the car. It is very apparent that the owners of these cars put a huge amount of time and love into their cars. It must take a vast amount of money but it really shows.

This is the photo of the dashboard for this car.

This car had a full blown sound system. It really added to the visuals. The following is a video of the car and its interior. The video takes some time to load. Sorry for that.

There were five cars that were really wild. This one seemed to be the most advanced state of transition. It included a full sound systems.

Calligraphy Brushes in a Store Window 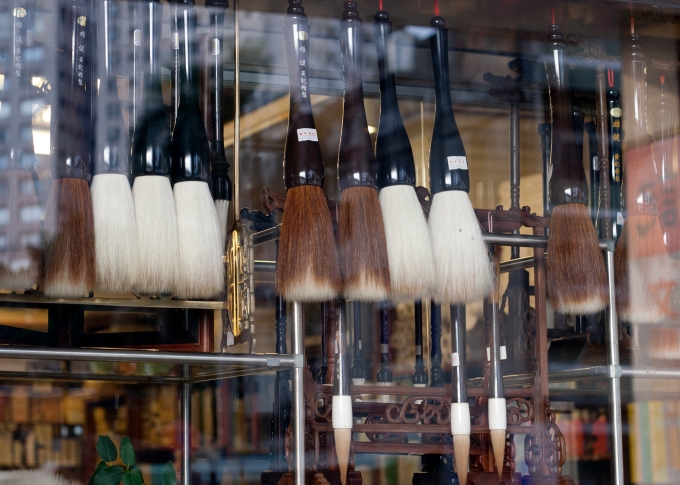 This is one of our favorite stores to buy calligraphy supplies. The store is also near where we’re staying in Taichung Taiwan. 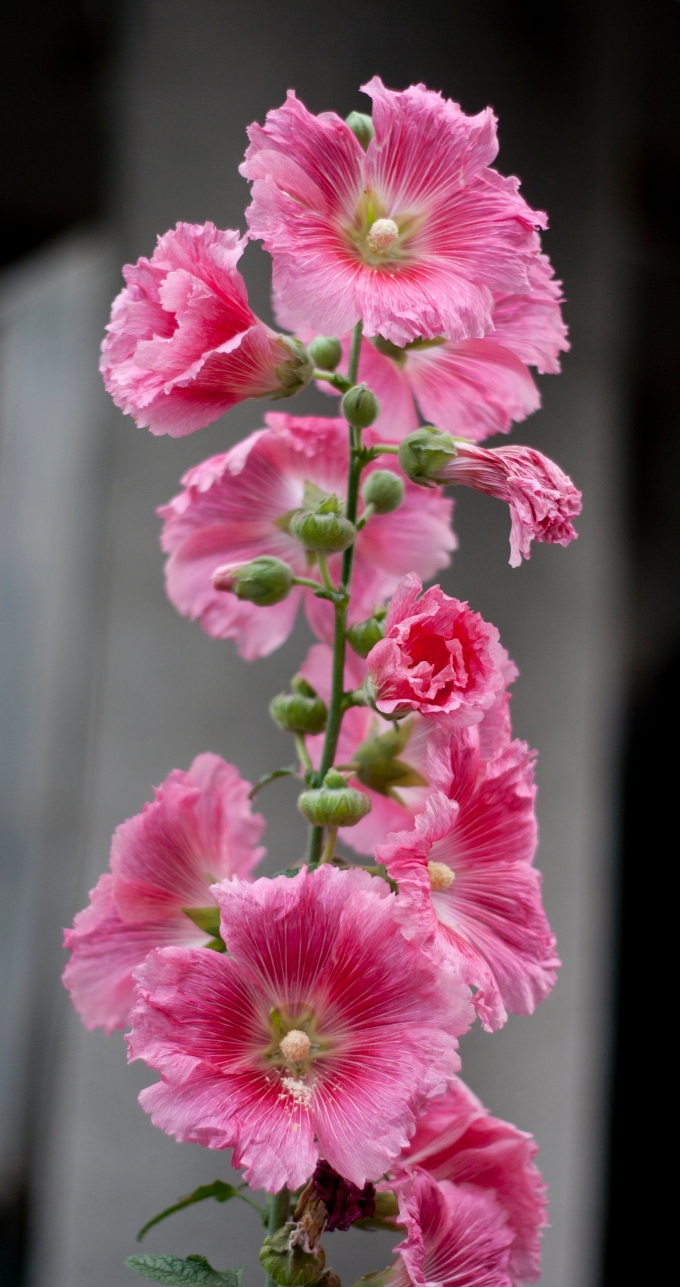 These flowers grow nearby where we are staying in Taichung, Taiwan. They are really stunning. The pink seems to be more common than the dark purple.

These flowers grow nearby where we are staying in Taichung, Taiwan. They are really stunning.

These slippers were waiting for us in our room at the Discovery Secret Confines Resort. They were a little bit difficult to wear because they did not have left or right and you could put them on from front to back or back to front. As you can see, mine did not fit well and Jane’s were too big to keep on. They were cheery.

I’ve stayed in unusual places but this has to be near the top of the list. I spent almost four years in the U.S. Navy but not in the luxury afforded by this hotel. The interior was also arranged to look like a ship. Since we had arrived after dark, the full impact was unknown until we walked out of the hotel the next morning. If you want to see more http://www.baystory.com.tw

The Principal was a very kind and gentle person. He seemed to really enjoy his job and the allowed the teachers to teach. I took many photos of him but this seemed to fit best with the Chinese characters in the back ground. He was sitting with us in a comfortable couch and chairs area. The Chinese characters were behind his desk. He also had lots of mementos in his office.

Shuili Elementary Student Removing Her Handmade Paper from a Tree

Sally was one of the best English speaking students. She really wanted to spend time speaking more English to us but there was little time with all the paper making going on. However, she was very creative.

Shuili Student Looking in the Window

Students can look into the teacher’s lounge through a series of windows. Terry, who speaks good English was a bit shy but this pose shows his positive personality very well.

There were a series of windows that looked out onto the hallway from the teacher’s lounge. Students would like in at what the teachers were doing. Some of the students posed while others played hide and seek with my camera. In most cases that shots were wonderfully framed or slightly offset as with this photograph. 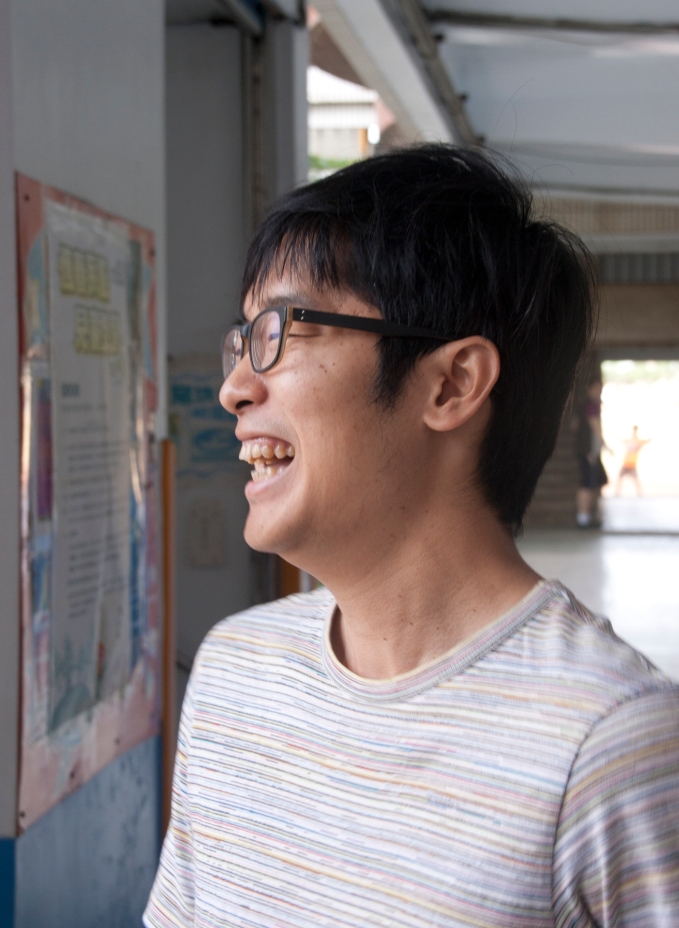 The English Teacher seemed to be particularly enjoying the paper making experience.

Broaden your technical and creative skills. Unleash the artist within you.

Photographer, Designer, Editor and Educator Ray Laskowitz talks about pictures and their back stories.

A photo blog by Dan Holtmeyer

Wandering through Time and Place

Exploring the world with Curtis and Peggy Mekemson

Teaching the art of composition for photography.

What I see when life crosses my path.