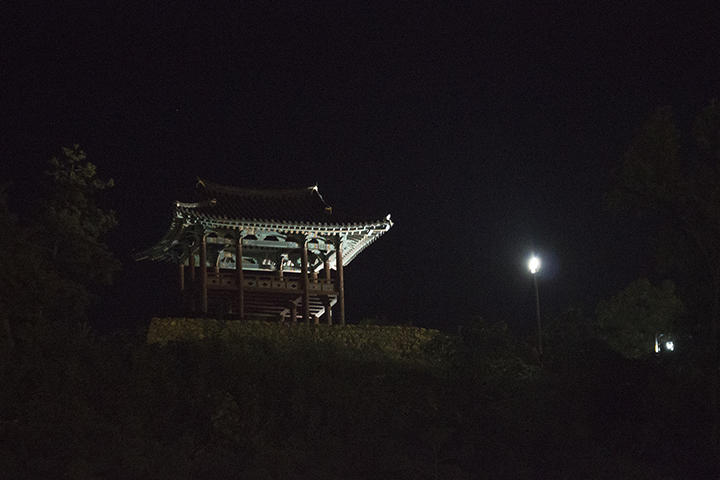 I visited Korea in October 2013 for an International Nature Art Curator’s Conference hosted by YATOO-i – http://www.yatooi.com. My wife,  Jane Ingram Allen had been invited to this conference because of her background and experience. The conference was held in Gonnju a city of about 250,000 people. The photographs here are not of the conference but of my travels in and around Gonju. 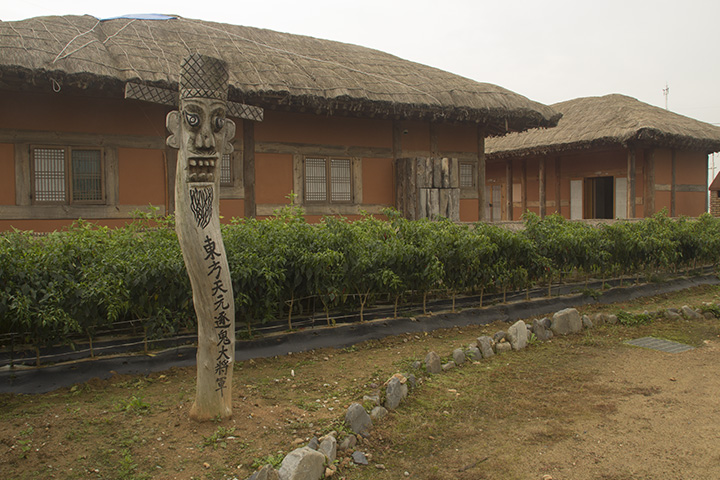 Some of the conference attendees were housed in these very tradition recreations. They were very beautiful but sleeping on the floor was extremely difficult. The next day, we were given mattresses that we put on the floor and then blankets on top. Still hard but better than nothing. 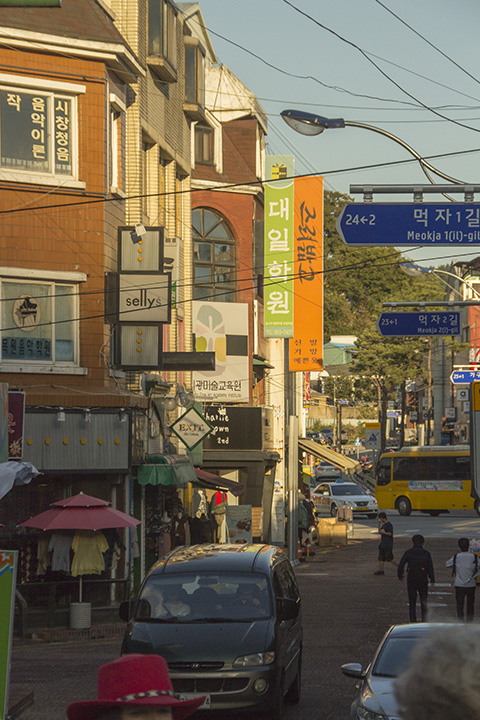 Gongju had a interesting streets. This one was a small side street with many businesses. 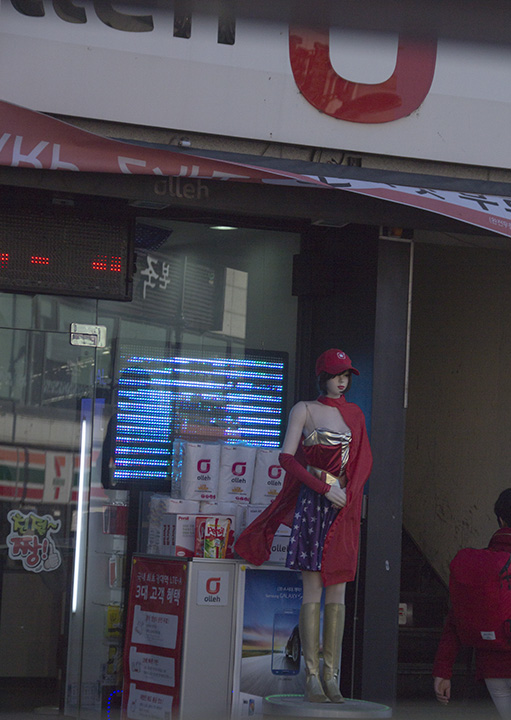 One of our friends who came up to visit us pointed out this mechanical woman. I’m not sure what they are used for as I only saw this one and it was from the car. 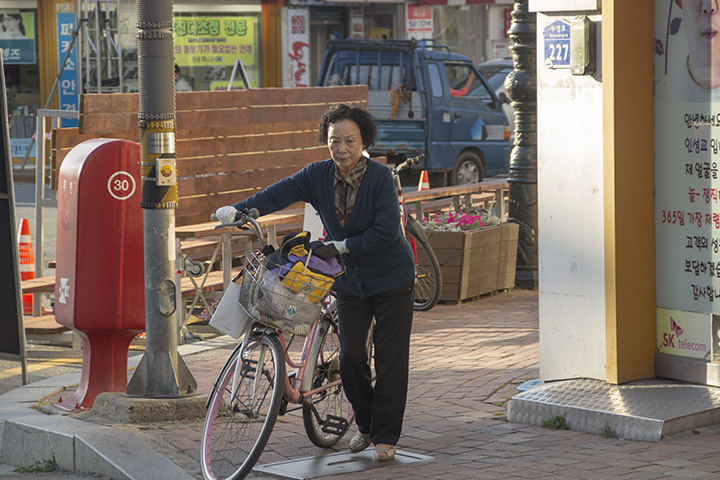 Before taking the picture of the mechanical woman I spotted this woman on the bicycle. I enjoyed that she was riding the bike with white gloves. 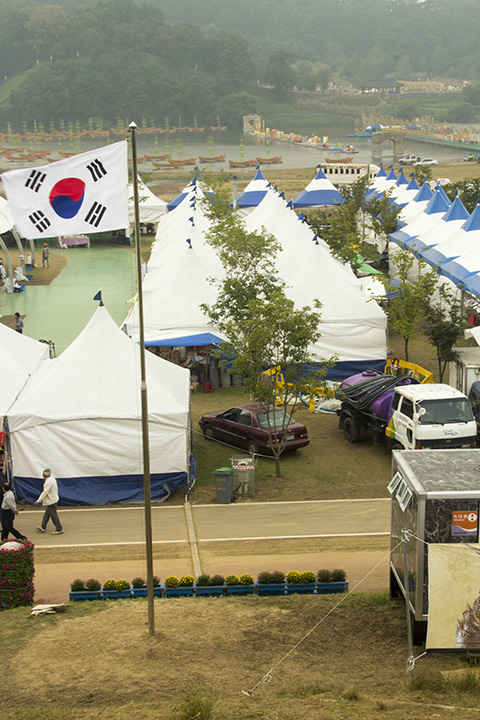 There was a traditional festival celebrating the history of the city. Most of the events were taking place on both sided of the river and at the castle on the other side of the river. 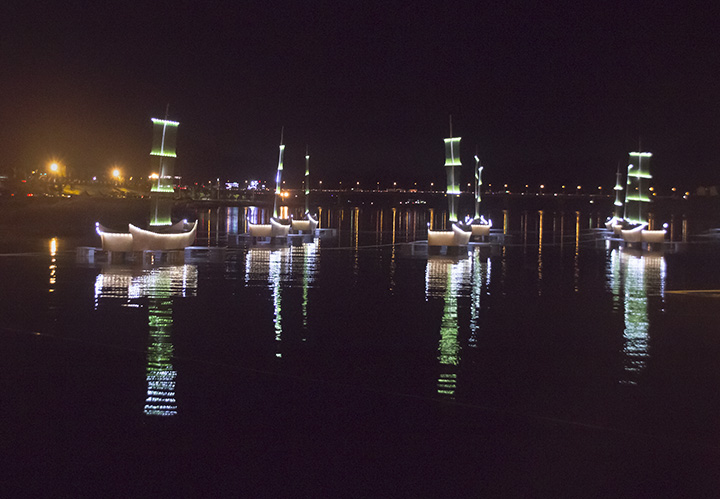 These ships symbolize the strength of the emperor. They were lit with lateens but largest ones were on the opposite side of the pontoon bridge that people used to cross the river. 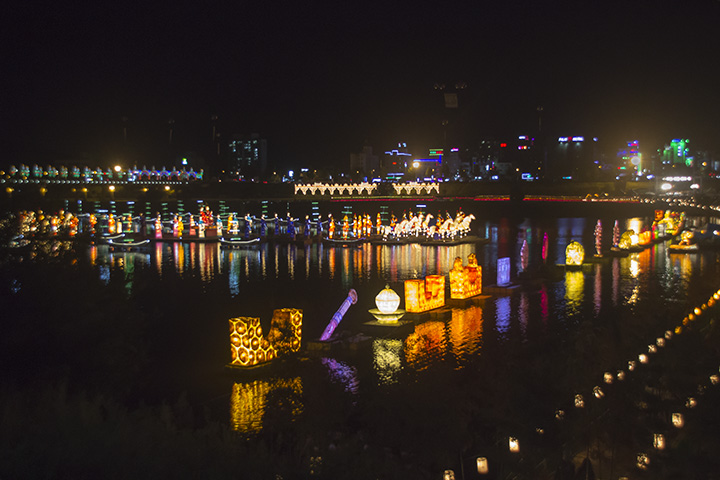 These are the lanterns seen from the castle side of the river. 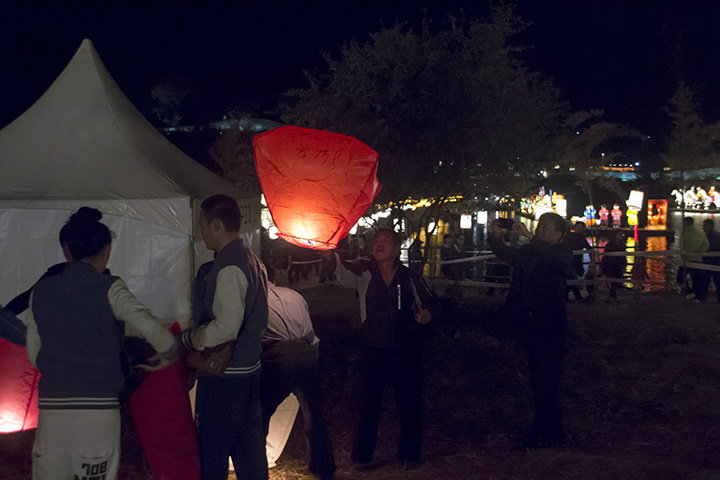 The festival organizers made it possible for visitors to launch fire lanterns. You could write wishes on to the side of the lantern. and then launch them. 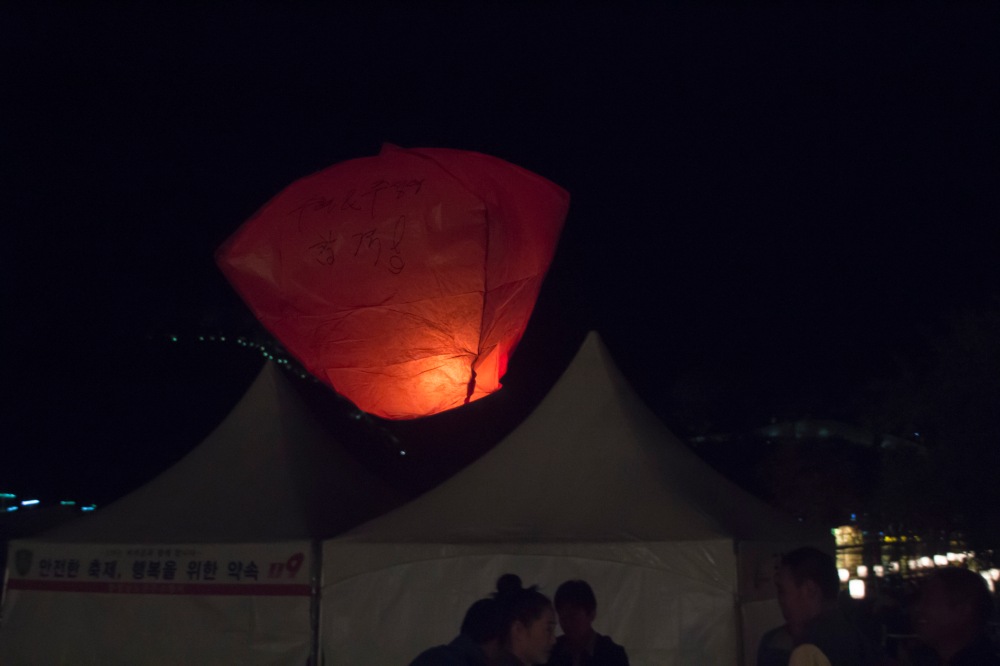 Here is a lantern rising with someone’s wishes written on its side. 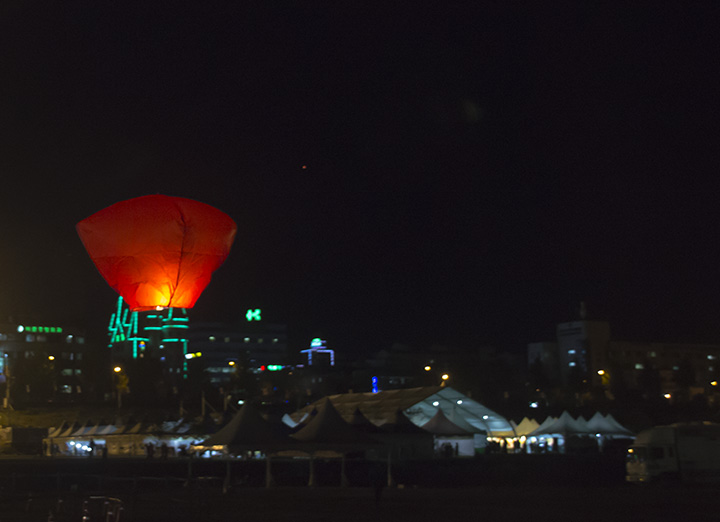 Launched lanterns rise and then head out over the river as this one is doing. 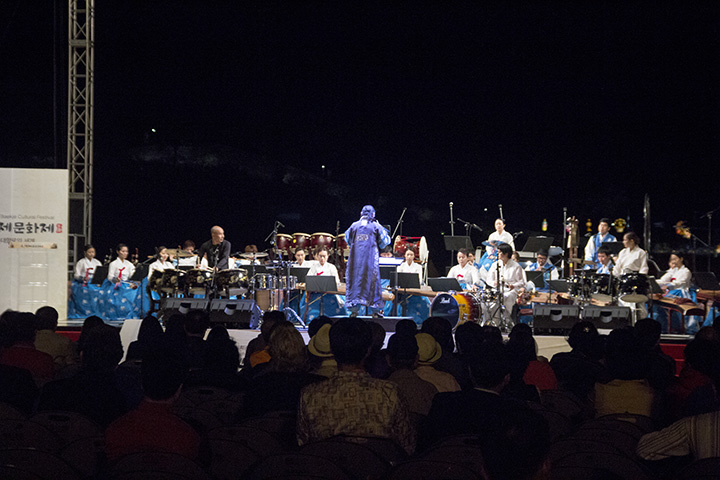 A concert with traditional instruments was held at the festival. Here two drummers are performing with one counter pointing the other. This was a lot of fund for everyone, including the drummers. 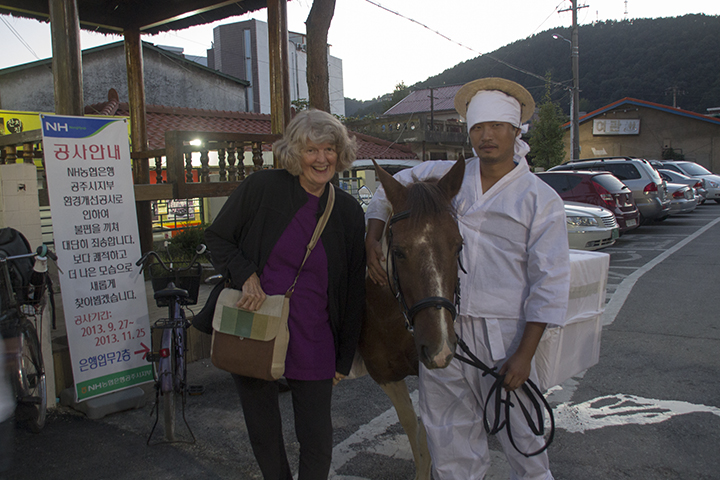 We attended a parade that was part of the festival. One of the onlookers was this man and his horse. Jane couldn’t help herself. 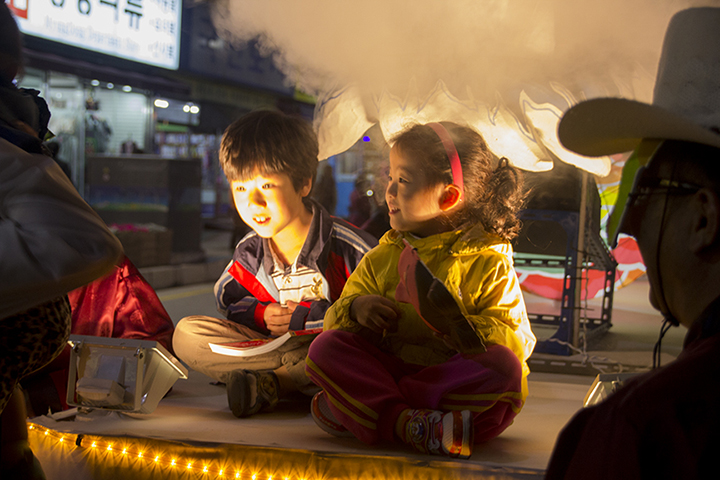 These two children were riding a float in a holiday celebration parade in Gungju Korea. The float was a depiction of a dragon. 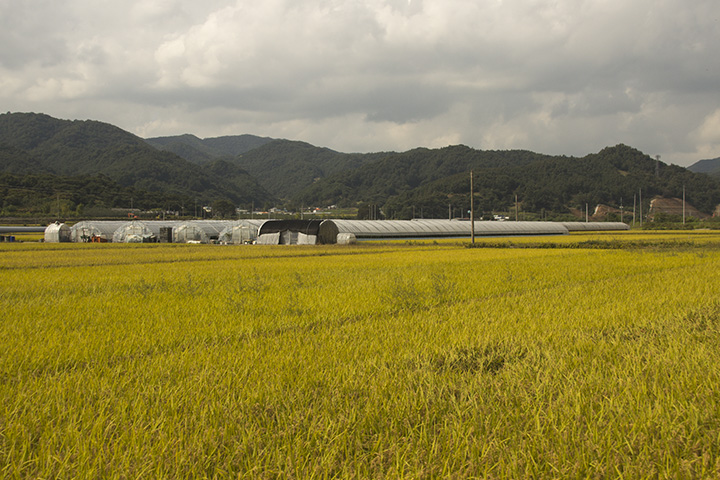 This rice field along with many others was nearly ready to pick. 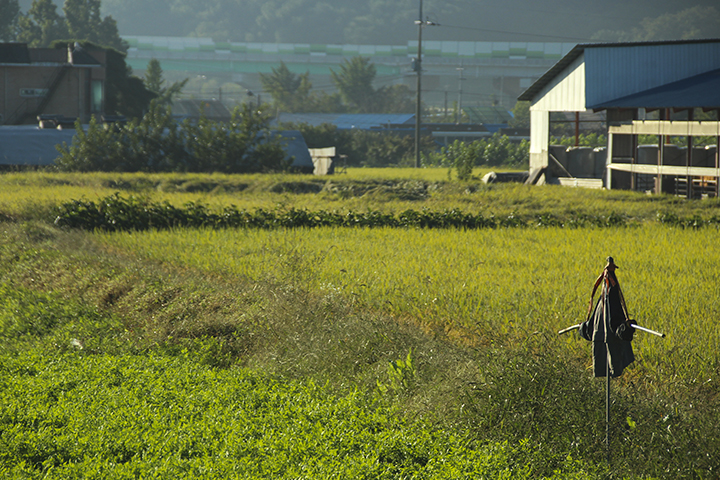 This scarecrow was near where we stayed. 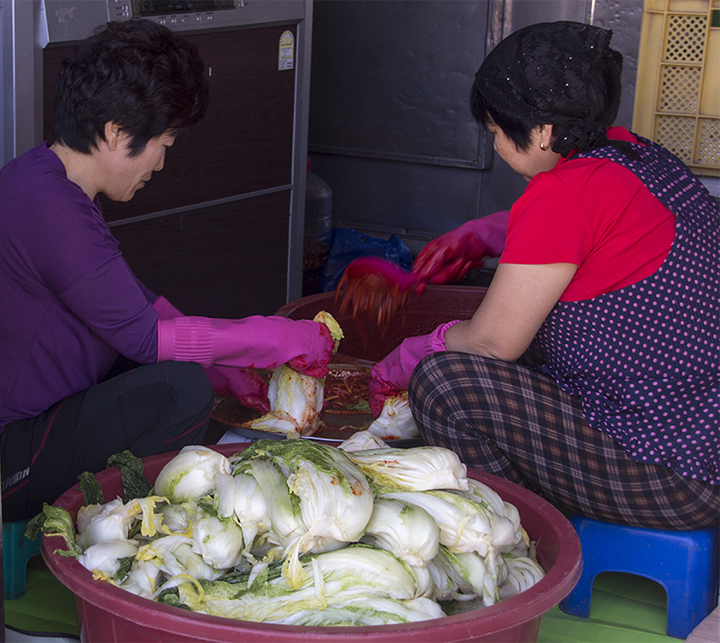 I happened upon these two women cleaning vegetables for the dinner meal. I really enjoyed the colors from the seat to their clothes. 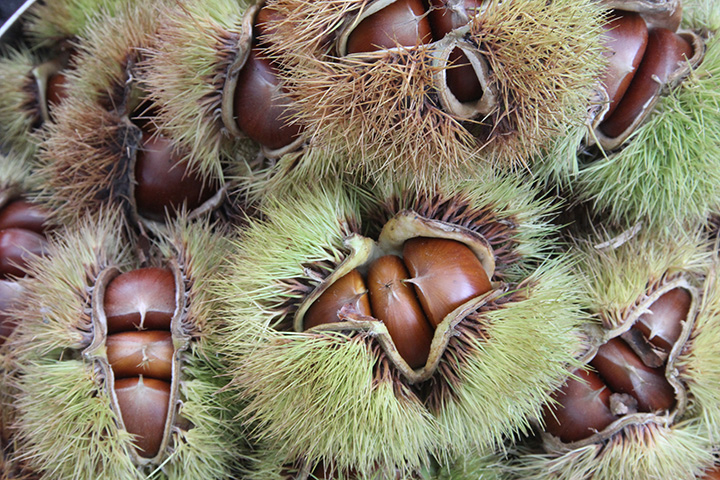 These are chestnuts that have split from their husks. They were being sold in the country. 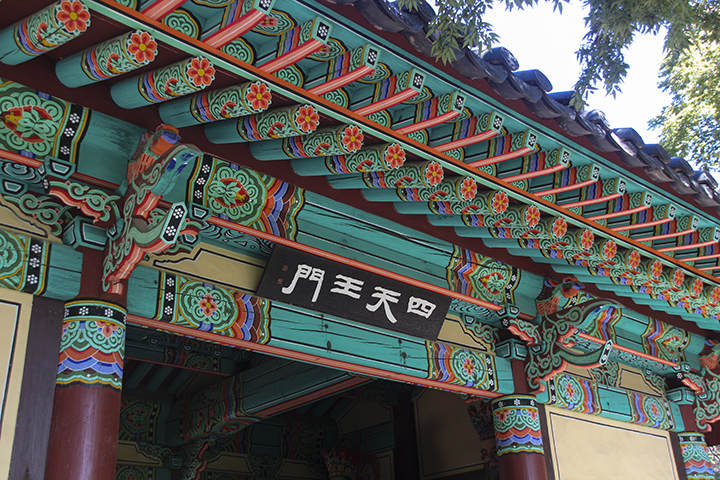 We saw some traditional temples that had Chinese characters written on the entrance. Because of the continued and growing interest in the Christian church the temples have been used less and less. In Taiwan, the temple is the center of a community. 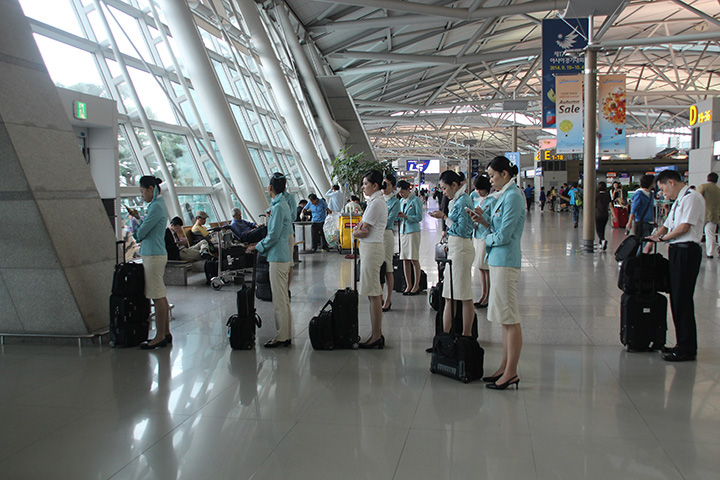